Hags-Club has it’s own hack engine which is called H3E and it has built-in configs system which can help you to make the hack work exactly as you want it to. Using configs is not a must, but it can advance your hags usage. 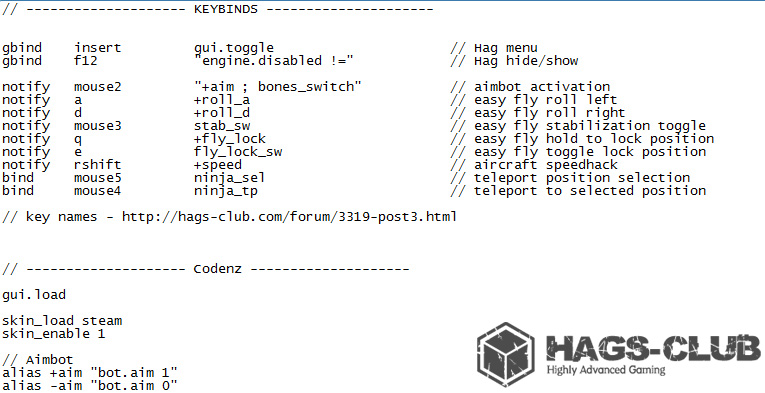 In configs and hags console in-game you can do everything that hags client actually can. Hags visual menu covers most of the settings, but full is still console only, actually visual menu is always made based and console commands, so if you can operate with configs — you are the god.

At 06/09/2016 hags menu can’t bind keys, it’s only from configs, so the main and major thing with configs are keybindings, all our hacks have keybindings and it can be done like you want, for example it can be «hold to activate» aimbot or aimbot toggle, up to you.

You can make different settings setups for anything, you can make a switch button or so. For example, you made 3 sets of settings: Legit, Middle, and Rage, you can save them to three different files. Make a small script which will swap between them using a hotkey in-game. It can be 3 different keys for those setups.